Disaster Restoration Gives Back to the Center Point Fire District

The Center Point Fire District Combat Challenge Team, which has more than held its own in the world of competitive firefighting for the past four years, might have just gotten one step quicker.

Thanks to two separate checks written by local supporters, the six-man combat challenge team will be sporting some brand new, lightweight gear this season. 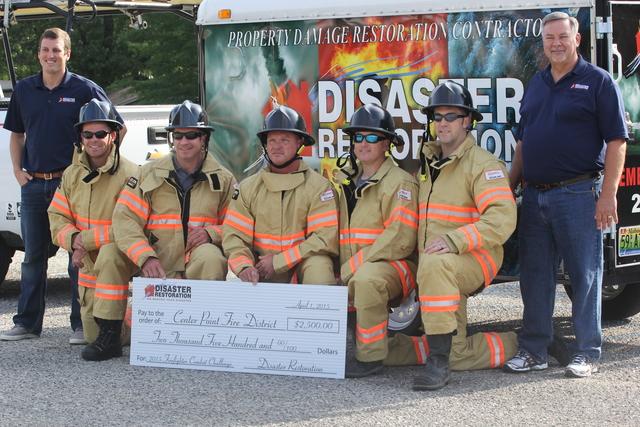 Chris Jones of Automatic Fire Systems in Trussville made a donation along with Disaster Restoration owner Ken Pate and senior project manager Tim Cornwell. Between the two donations, each member of the combat challenge team was able to purchase matching uniforms, which are designed specifically for competitive situations.

“They said what they were using was a little bit old and they were having to modify their old uniforms to make them work, so with any sport or any competition, your equipment is very important,” said Cornwell.

Unlike their previous uniforms, the new ones are not designed for on-duty firefighters. The lighter uniform cuts down on the number of pockets and protective padding compared to the official on-duty gear.

“We started off (using) our regular structural gear that we wore when we were at work, and to be able to get this stuff will make us all look uniform and hopefully make us a lot more competitive,” said Kalem Hicks.

Just how much difference will the new gear make? The team, which placed first at a competition in North Carolina last year, will know in two weeks when it competes in Lexington, Ky. After a few more competitions over the summer months, the team will focus its efforts on Montgomery where this year’s World Challenge will be held.

The team is made up of Hicks, Brandon Dahlen, Adrian Millican, Lonnie West, C.J. Elliott and Jonathan King.

Team members train for competitions both as a unit and individually. All six men can be found at Erwin High School’s old football field working on their conditioning and team chemistry.

“We come together on shift, and we use an old stadium at one of the high schools, and we set up a mock course where we all get together and actually run the course,” said Millican. “(We) practice our times, practice our handoffs and things like that.”

Now in its fifth year as a competitive squad, the team has seen steady improvements.

“We’ve been improving every time we go out on the courses and we just get stronger as we go throughout the year, so we’re really looking good for another good showing this year,” said Hicks.

According to Millican, the group has improved its relay time by over 20 seconds since its competitive days began.

“Of course, the biggest thing is when we can get sponsors with gear like this, when you can get the best stuff out there that you can move in freely, then that’s going to make a big difference in how we actually perform when we get out on the course,” said Millican.

We serve the following areas